Maria Callas was Gijs’ muze to design the chatelaine for this exhibition. The special designed earring can be seen at the following museums:

The Netherlands, Hertogenbosch, Stedelijk Museum ’s-Hertogenbosch from 21 June until 7 September 2008. 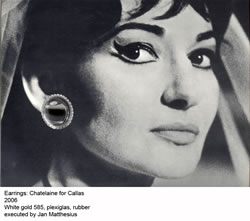